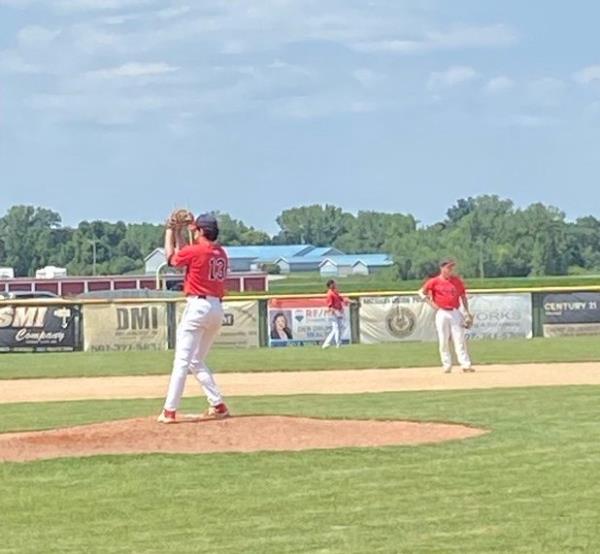 The Town Tigers hung around early at St. Clair on Sunday, carrying a 2-1 lead to the fourth inning before giving up 15 unanswered runs – including a painful 13 runs in the sixth inning. The No. 13-seed Tigers ultimately fell to No. 3-seed St. Clair, 16-2, in seven innings.

The setback means that the Tigertown Express will play an elimination game at Minnesota Lake at 6 pm Saturday. The Tigers will have to win that game – plus four more – in order to advance to the state tournament at the plush grounds of Waconia, Chaska and Hamburg.

If the Tigers beat Minnesota Lake, they will play again on Sunday at Arlington or Waterville. Should the Tigers win that one, any remaining games will take place on the following weekend.

Jake Mercado got the playoff nod on the hill and after 2 1/2 innings, things were scoreless with the Tigers collecting the game’s only hit. The Wood Ducks struck first with a run in the third, but Belle Plaine shot back in the fourth with RBI singles from Josh Terrio and Garrett Boblitt for a 2-1 lead.

The Woodies didn’t let that taste linger, soon benefitting from two BP errors to take a 3-2 lead in the fourth inning that they wouldn’t relinquish. With the score still 3-2 in the sixth inning, Mercado got just one more out before a bloop and a blast chased him, pushing the score to 6-2.

A string of Tiger relievers only seemed to pour gas on the fire, and when the elusive third out was finally secured, the Wood Ducks had hung the crookedest of numbers – an unlucky 13 spot – on the board.

Aside from Terrio and Boblitt’s RBI safeties, Carsen Ladd contributed a pair of singles.