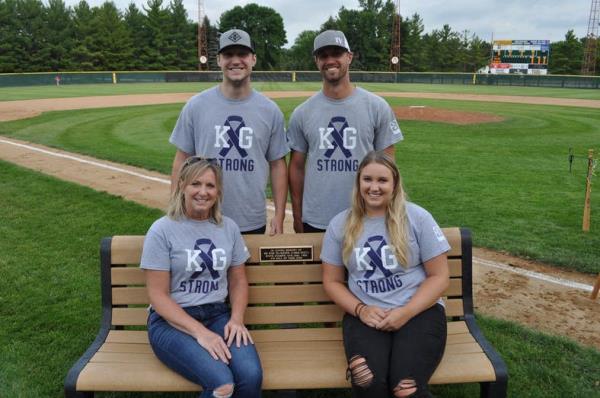 ARLINGTON, Minn. – The Arlington A's had two different runs as this state's best amateur baseball team, those being in the late 1960s, and then for a longer period from the end of the 1970s through 1985.

On Friday, the current A's were playing the Gaylord Islanders in a River Valley League game. There was a pregame ceremony to commemorate Kim Glieden, the third baseman on the last three Arlington title teams in 1979, 1984 and 1985.

Glieden had a second recurrence of cancer in 2019, and this came with the assessment that he had "six months to live." That summer, on July 17, the Twins gave him the honor of throwing out a first pitch at Target Field.

"Kimmer," as he was called in this area, beat the prognosis by more than a year, but he died on April 28 at age 63. There was a memorial service after that, and then on Friday, family members went to Guardian Angels Cemetery in Chaska to bury his ashes.

A few hours later, at mid-afternoon, there was a small gathering of former A's at Dave Hartmann's recently opened baseball card and memorabilia store in downtown called "Who's on First?"

Hartmann was a young reserve on the 1969 champs, and still playing a decade later when the A's started winning titles again. The other drop-ins for the breeze-shooting session were Greg Odegaard, Greg Kubal, Duke O'Brien and Craig Glieden, Kim's slightly older brother.

Eddie Mueller was the manager in the early '60s and had the good fortune of Jim Stoll and Larry Klunder also arriving early in the decade. Klunder had been hired as a physical education teacher and to coach baseball and basketball. Stoll, a former pitcher in the Pirates organization, was spotted pitching on the Iron Range for Marble, and luckily there was an opening for a late-sleeping sweeper at Arlington's cement works.

Stoll became one of the great pitchers in Minnesota's townball history and an inductee into the amateur baseball Hall of Fame in 2004. Klunder's influence on Arlington baseball earned him the same honor in 2017.

They were known for intensity as competitors. Stoll is alleged to have visited towns on the A's schedule in days before a game and scrounged up bets on himself.

And Klunder? His influence started with the junior rec program and lasted through lifetimes — Larry's, now in his 80s, and old ballplayers in their 60s. There's a photo of local legend from a state high school tournament game in 1976, with Klunder in the grill of a plate umpire and Kim Glieden walking away after being called out.

"He was never a big man, but there was never any fat on him," Odegaard said. "He looked like a Marine, even though he wasn't one."

He decided not to play baseball as a senior. He worked at the gas station and made some money. It was the brief time when Minnesota's drinking age was 18, so Craig might have been spotted in the Arlington Muni having a beverage rather than patrolling right field.

The locals in the card shop smiled at that memory. Why didn't you play?

Craig remained stoic and said: "Coach Klunder and I had a personality conflict."

Obviously, the Gliedens were both forceful in attitude, although Craig was quieter about it. There are numerous tales of Kim's fire, first as a three-sport athlete at Arlington High, then as maintainer of the A's hot corner for long summers.

For instance: The Gliedens hit back-to-back in the A's order. Arlington was playing Stark in the state amateur quarterfinals at Belle Plaine in 1981. One of the Helgets (always Helgets with Stark) decided to use an open base to intentionally walk Craig.

Kim's response was to hit a three-run home run, then look at the Stark dugout as he crossed home plate and shout: "That was like walking Maris to get to Mantle."

O'Brien, Arlington's Duke, tremendous first baseman, power-hitting lefty, said that "Kimmer" amused him most with this:

"A pitcher would throw ball four to him, and be out there disgusted with himself, and Kim would be sticking out his chest and giving one of those stares that said, 'I knew you were afraid to pitch to me.' Kimmer never lacked for confidence."

Nor did the A's. Those five state titles came when there were two classes for baseball. Arlington played the team from the higher classification in a "mythical" title game a week after the state tournaments and won four of those.