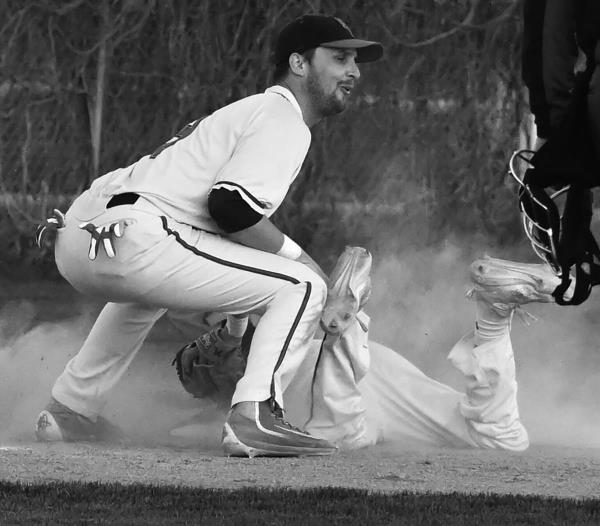 By Brett Kruschke and Matt Ruehling

The Tigers fell to 0-4 on Friday, May 14, after a weak effort in Watertown, with each loss this season seemingly getting to be worse than the last.

Saturday, May 15, was a much-needed salve for Team Tigertown, therefore, as the locals held off Webster in a well-played game.

Friday’s home game against Green Isle has been canceled, as a lack of available players for May games continues to be a growing concern for Minnesota Baseball Association teams. And that, by no means, excludes your hometown Tigers, who have had to get more creative in recent seasons than had previously been the custom.

Please note that RTL Construction Night, previously scheduled for this Friday, will now be held on Wednesday, May 26. As per usual, each fan in attendance will receive a free hot dog, pop, and chips, courtesy of RTL.

The lights never turned on in Watertown for the Tigers – on or off the field.

Trailing big early, a bank of lights closest to home plate gave out in the fourth inning. Not only did the Tigers have no runs, but they didn’t even have a hit yet – and due to the lighting situation, it was quickly agreed that the game would end after five innings.

No, the Tigers didn’t get a hit in the mildly-fateful fifth either. Most folks would call that a no-hitter - except for Major League Baseball?! I guess we’ll have to defer to them on this one …

The Tigers only had three base runners in the game, coming on two hit batsmen and a walk.

Mitch Stier came out of his premature retirement and labored through four innings on the hill, walking or hitting a combined 11 Watertown batters. Stier’s “cutter” had a little bit of movement – too much so, apparently – although he notched three punchouts in four innings.

There were no lighting issues in Webster, just bright sunshine. So bright, in fact, that Zac Dahlke lost two fly balls in the sun!

With the weather warming up, so did the Tigers' bats. A two-out single in the first inning from previously-retired Matt Schultz got the scoring going early. Webster matched the Tigers run for run, however, through five innings.

Fireworks flew in the third when Jon Schmidt hit his first Tigertown home run – also, the first circuit clout for the Tigers this year. Webster answered in the home-half with a bomb of its own, however.

Josh Terrio gave Belle Plaine the lead with an RBI single in the sixth. Schmidt stayed hot in the ninth inning, adding an insurance run with an RBI double. Other offensive leaders were Schultz with two hits, while Zac Dahlke was on base four times despite taking just two hacks in five at-bats.

Colton Kerkow lead the way on the mound, getting the win with five relief innings. He yielded just one run and struck out seven.