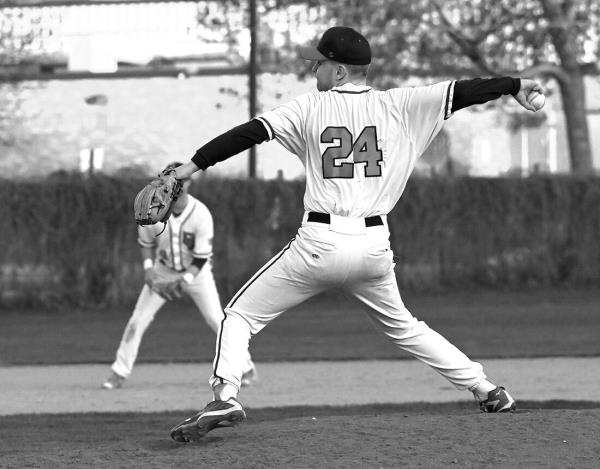 By Brett Kruschke and Matt Ruehling

The Town Tigers fell to 0-3 on the season – all at home – after a punchless 9-1 loss to New Prague on Friday night, May 7. Saturday’s game at St. Benedict was canceled and will not be rescheduled.

The cavalry is on the way for Team Tigertown, as college ballplayers near the conclusion of their seasons, but so far it’s been a patchwork quilt for the locals. Perhaps the experience gained by players not normally in a full-squad lineup will pay off down the road.

With a youth tournament in town, the Tigers will be on the road this weekend and looking for a pair of “W’s”. Friday is a 7:30 p.m. game at Watertown, while Saturday is set for 2 p.m. at Webster.

Stick with your boys; follow ‘em to the aforementioned towns, or at least follow ‘em on the Twitter machine: twitter.com/bptigertown. And don’t forget the mothership, at bptigertown.com.

The Tigers started out cold on a brisk night at Tiger Park and never warmed up. Carsen Ladd got the start on the mound, and after a two-run double and an error, the Tigers were down by three runs before they stepped to the plate.

Ladd, Josh Terrio, and Derek Dahlke held the Orioles to one run over the next six innings, with the latter collecting all six of his outs via strikeout.

The flood gates opened up in the eighth inning, however, when the Orioles tacked on five more runs – six, due to free passes.

Offensively, the Tigers scored their lone run in the ninth inning with Jon Schmidt’s run-scoring double. Schmidt, Dahlke, and Colton Kerkow notched the hits for the Belle Plaine cause.