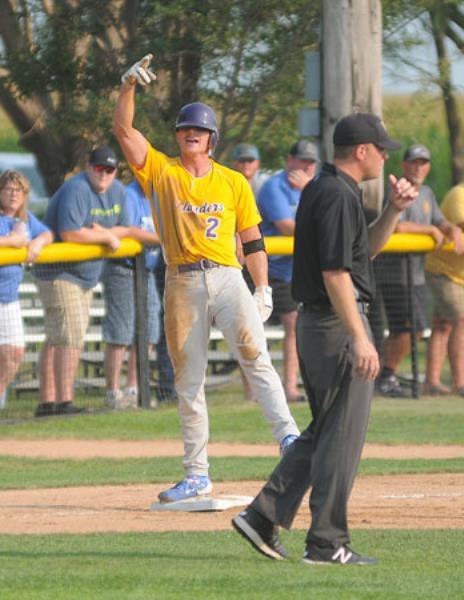 Brody Rodning has been quite the difference maker for Gaylord.

The Toronto Blue Jays left-handed pitching prospect has helped the Islanders get back to the state tournament for the first time since 2016 and he helped get them through to the second weekend after a 3-0 victory Sunday at Milroy Yankees Field over St. Martin.

Rodning threw six innings, struck out 10 and allowed just three hits. And, oh, by the way, he drove in all three runs with a triple in the second inning. Rodning finished 2-for-4 at the plate.

Josh Gason drew a one-out walk in the second and Travis Schmidt followed with a double. Collin Grams walked to load the bases and Rodning cleared them.

Another Brody picked up where Rodning left in the seventh inning. Brody Curtis, a draftee from Belle Plaine set down all nine hitters he faced. Curtis struck out four in relief.

Adam Winkels, a draftee from Farming, kept the Martins in the game and retired 13 straight hitters. He got a double play ball on the first pitch he threw in the third inning and recorded 14 outs after facing 13 hitters.

After Winkels left, Gaylord added another run. Rodning collected his second hit to lead off the inning, stole second and scored on Erik Goetsch’s base hit. The Islanders added another run when Kevin Durham, running for Goetsch scored on a single from McKoy Rodning to extend the lead to 5-0.

Gaylord will face Sartell Saturday at 11 a.m. in Springfield in what should be another great pitching matchup as Muskies’ ace David Deminsky is expected to start.